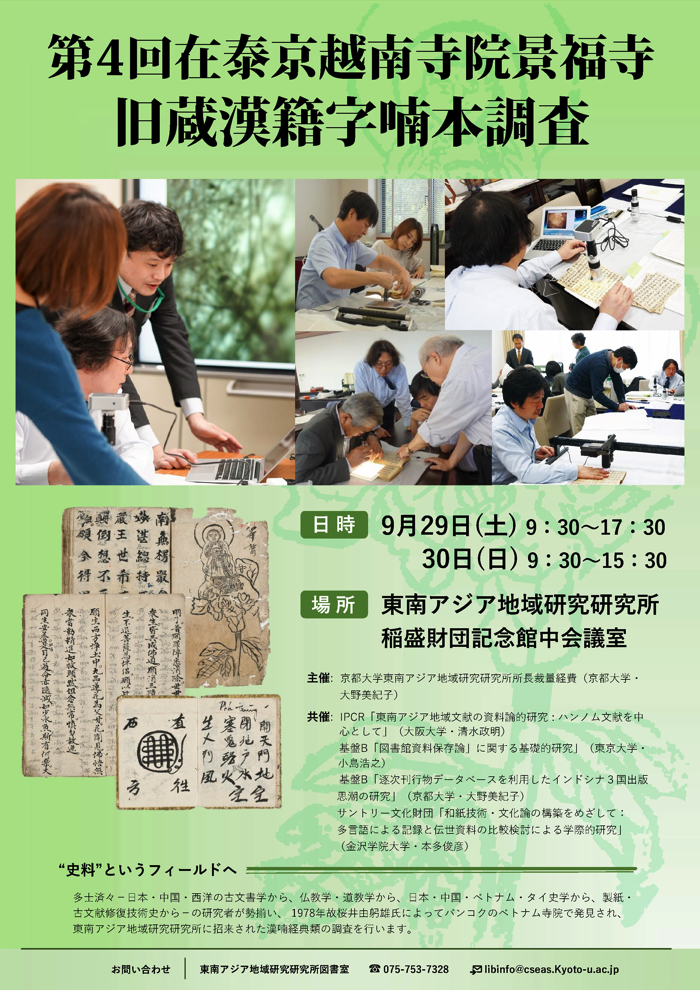 Since last academic year I have been a participant in the joint research project “Documentary Research on Han Nom Manuscripts,” led by Professor Masaaki Shimizu. This involves conducting investigations of Vietnamese language manuscripts that have been handed down to temples in Bangkok.

I began my career by setting my sights on research into Japanese medieval history, and up to now I have been continuing research in this field in my own small way. My first post was with the Shiga Prefecture Education Committee, where I was engaged in examining, designating, and repairing cultural assets. One of my most cherished memories is of the investigation of the Great Perfection of Wisdom Sutra, which was the first cultural asset research project I was a part of in an official capacity. Guided by my superiors, I opened the wormeaten sutras that had been preserved in the small, local shrines and sanctuaries. I was amazed at the abundance of cultural assets in the Omi region, which go back to pre-medieval times. This was when I first began to travel to sites of cultural assets.

My next post was at the Kyushu National Museum, where I became acquainted with researchers specializing in the history of overseas exchanges, which I was not familiar with. Originally, although I had a strong interest in the countries of Asia, I had set out on the path of Japanese historical research since my character is to try out only things that are close to hand. In this new post, however, I was given many opportunities to come into contact with previously unfamiliar areas. I was placed in charge of the purchase for the museum of a narrative scroll owned by Jomyoji Temple in Nagoya City which is similar to the famous scroll depicting red-seal ship trade at Hoi An in Vietnam. This purchase was the trigger for my involvement with Vietnam. I was also very fortunate to be placed in charge of the special exhibition titled The Great Story of Vietnam, which gave me an appreciation for the appeal of Japanese and Vietnamese diplomatic documents. I subsequently moved to the Agency for Cultural Affairs, where I work mainly with antique documents, and I now spend all my time investigating cultural assets.

Having come this far, looking back at the past, I realize that I have tried my hand at many different things, all the while being led on by my interests and curiosity. In all of these, I am still far from reaching the goals I have set for myself, but what I can say is that I believe this has only been possible through being directly engaged in work with cultural assets throughout all these years. In the world of cultural assets, the research begins with objects, and one must develop a constant openheartedness in order not to overlook any object that one might encounter. However, in contrast to the fields of arts and crafts, with the history of documents one cannot get anywhere unless one can read the letters. Although I am a novice in Vietnamese history, I can fortunately make headway, as research of the antique manuscripts of Vietnam is within the “Chinese character cultural sphere,” It is also possible, to a certain extent, to apply my knowledge of and experience with Japanese paleography and manuscript research that I have studied thus far.

In the joint research that I mentioned at the outset, many researchers from a variety of fields, such as myself, are participating along with researchers of Vietnamese history. The viewpoint of the research into objects makes it feasible to conduct the kind of research where people from different fields come to work together. One can also not experience the kind of stimulation from this kind of research if one is too intent on delineating one’s own academic territory. I would like to express my gratitude to IPCR for supporting this kind of interdisciplinary research, or perhaps we should say groundbreaking research, and for its breadth of inclusiveness in accepting researchers from other fields.